The 2015-16 PGA Tour season ended with a rousing Tour Championship, followed by one of the most exhilarating Ryder Cup competitions in recent history.  You might have thought the fireworks for the year were done.

But yesterday Scott Piercy began the new PGA Tour season by setting the course record at Silverado (first set by Johnny Miller in 1976), shooting a blistering 10-under par, 62 in the first round at the Safeway Open. 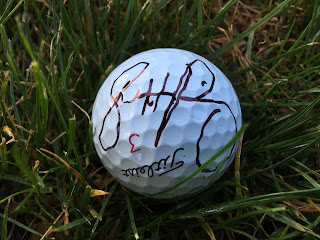 And I'm starting the new Tour season by giving away a Scott Piercy signed Titleist Pro V1x ball to a lucky winner on twitter.